How to be an Asian American anti-racist 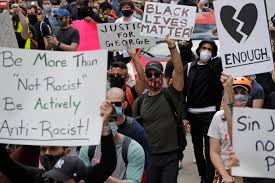 By Ally Mark and Nicole Tiao

The last few months have been difficult to process. It’s devastating to watch the videos of police violence, first against George Floyd, then against protesters demanding justice.

It’s been months since Breonna Taylor was murdered by the police while sleeping in her own home, and still none of the cops responsible have been arrested.

It’s dystopian to witness government crackdowns across the country, as local, state, and federal police beat old men, pepper spray young children, and snatch people off the streets in unmarked vehicles. The president of the United States himself ordered police to violently tear gas community members for a grotesque photo op.

The deaths of George Floyd and Breonna Taylor have reignited a national movement, demanding Black Lives Matter and justice. Many feel hopeful that these civil rights activists may be ushering in a new era of racial self-reflection. To meet this moment demands that we confront anti-blackness in our own Asian American community and work with the Black community and others to tear down white supremacy. The protests may have died down, but we cannot let ourselves look away from the changes we need to bring to our government.

George Floyd’s murder was enabled by an Asian American police officer, who stood by while another officer ripped the life from another human being. Our community must play a role in the movement towards an anti-racist society, and this is what we aim to address in a new series of blog posts.

Let’s start by defining racism itself. It goes beyond individual antagonism, contrary to what many people would like to believe. In this conversation, we’re using a definition of racism that encompasses all the state-sanctioned and individual violences against people simply for their perceived differences.

Race is a “social construct,” meaning that we, as a society, assign value to certain physical differences. And while that may sound neutral to some, ultimately, racism against Black communities leads to very real harms, violence, and premature death.

Racism manifests in four different levels: individual, interpersonal, institutional, and structural. Though this vocabulary seems high level, we hope they will help expose how racism exists in our everyday lives. Individual racism refers to personal beliefs and actions that stem from racism, like believing in white superiority. Interpersonal racism happens between people, such as calling someone a racial slur. Institutional racism is in the discriminatory practices and policies that favor treatment of white people. Structural racism, also called systemic racism, describes the way racism governs how our entire society privileges whiteness.

The systemic racism that polarizes America depends on false narratives around racial hierarchy: this racism built the foundation for how our society is structured and run, and it quietly determines many facets of our lives, from housing, education, and healthcare to policing. Our current system specifically privileges and protects whiteness, while casting Blackness as a threat. Because of this, Black people face literal threats to their lives while doing everyday actions like running in the neighborhood, going to the local grocery store, or even sleeping in your own home. If you are a visual learner, we highly recommend watching this video for another explanation of systemic racism.

Applying concepts: how does racism manifest itself?

Key to understanding systemic racism is that the inequalities we see between racial groups today have been created and kept in place by the way our government was built. Racism has been woven throughout our state structures – government functions such as voting and redlining – and those racist structures inevitably lead to the systematic devaluing and destruction of black lives, or state-sanctioned violence.

While the concept of state-sanctioned violence is most obvious in police killings, such as the murder of George Floyd, understanding the state-sanctioned nature of racism also helps explain incidents like Christian Cooper’s encounter with a white woman in Central Park, New York City. Cooper was out birdwatching when the woman threatened to call the police on him. She felt comfortable threatening such state-sanctioned violence against Cooper, because she saw him as a man without the privilege of equal protection under the law.

Her instinctive reaction shows that she understood the power of her whiteness and how to manipulate it. She knew that the police who responded to her call would immediately see Cooper as a danger and the aggressor, calling upon centuries of white women falsely accusing black men of sexual violence and causing their deaths at the hands of lynch mobs, police, and courtrooms.

In this example, we can understand how deeply race is ingrained in the way the state views the Black community. The state, represented by the police, defaults to taking a combative, guilty-until-proven-innocent stance against a racial group it considers a threat.

Meanwhile, the citizens of this state, like the white woman here, implicitly understand this relationship because it’s been tightly woven into their lives every day. Even a situation that doesn’t end in traditionally defined “violence” for the Black victim, demonstrates clearly still how power and violence are bound together by systemic racism.

The implications of systemic racism are far from theoretical; they are real, long-lasting, and dangerous, to the point of deadly. Look no further than the murder of Ahmaud Arbery for example. Arbery, an avid runner, was killed by a retired white policeman and his son. They randomly accused Arbery of being a criminal, and executed him, knowing that the legal system would favor their whiteness. The murderers cited civil arrest laws and operated under the assumptions that their friends in the police department would vouch for and protect them.

Even though they were not part of the official law enforcement system, these men instinctively felt enabled to carry out state violence against Arbery. The killing of Ahmaud Arbery took place in a system that reinforces white supremacy, recalling the roots of the police force itself as a community-based slave catching organization.

Ahmaud Arbery. Breonna Taylor. George Floyd. Premature death is a defining characteristic of systemic racism. The life expectancy of some Black communities can be up to a decade shorter than that of white communities.

The national scrutiny trained on police violence, and recognition of the Black community’s resulting communal trauma, has brought widespread acceptance of treating racism as a public health issue. Ultimately, this classification as a health problem underscores how explicitly state-sanctioned the violence is against Black people.

The comprehensive system of exploitation of the Black community can’t be attributed to just one person, one organization, one governmental agency. Before we can address AAPI anti-Blackness and the role that AAPIs play in the racial hierarchy, we must understand how our society systematically devalues Black lives.

In our next blog post, we will begin the conversation on how the AAPI community engages in systemic racism and anti-Blackness. We leave you with this incredible list of Black-led organizations to support, donate to, and amplify as we reflect on our own role in racism.

The content in this blog does not necessarily reflect the views of AAAF or the AAAF officers and board.