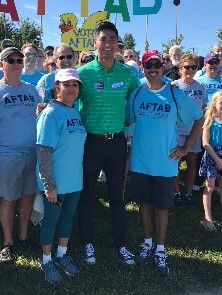 My name is Shivank Singh, and I’m working on the Aftab Pureval campaign in Ohio’s 1st Congressional District as the AAPI coordinator.

This week, the campaign had the honor of hosting Congresswoman Pramila Jayapal for a rally and lunch. It was my responsibility to organize both and ensure a sizable AAPI attendance. Through the support and hard work of other campaign members and dedicated community members, we gathered over 120 people to hear Aftab, Congresswoman Jayapal, and Court of Common Pleas judge candidate Pavan Parikh talk about the importance of AAPI votes and political involvement/activism. While it was amazing to hear the Congresswoman in person, the true mark of success for me was watching other South Asian Americans—including long-time family friends with no political history—take in the Congresswoman’s words and walk straight over to the campaign’s table to sign up to canvass and phone-bank. Aftab and Congresswoman Jayapal took 30 minutes to motivate my community to a level that had seemed impossible for years, for which I am grateful.

My parents walked in our hometown’s Heritage Parade with Aftab and 100 other supporters!

I have always admired Congresswoman Jayapal’s commitment to activism, so meeting her was a huge honor!

Moments like these—ones in which Aftab, through his genuineness and his passion, prompts groups of people into action—not only convinced me to join his campaign but have been the highpoints of the campaign experience. In a political climate that is so painful and disheartening, it is the individuals that step up to knock on a few dozen doors or make a few score calls that keep the campaign motivated and active. I am lucky to be working on such a fervently ardent team and for such an honestly dedicated candidate, and we are so grateful for the AAAFund’s support along the way. If you are interested in coming to Cincinnati to volunteer, please let us know! In the meantime, we appreciate your support to help us cross the finish line. We are so excited for November 6th, and I hope you are, too!