Meet Ronnie Chatterji, who could be the first AAPI elected to statewide office in North Carolina! 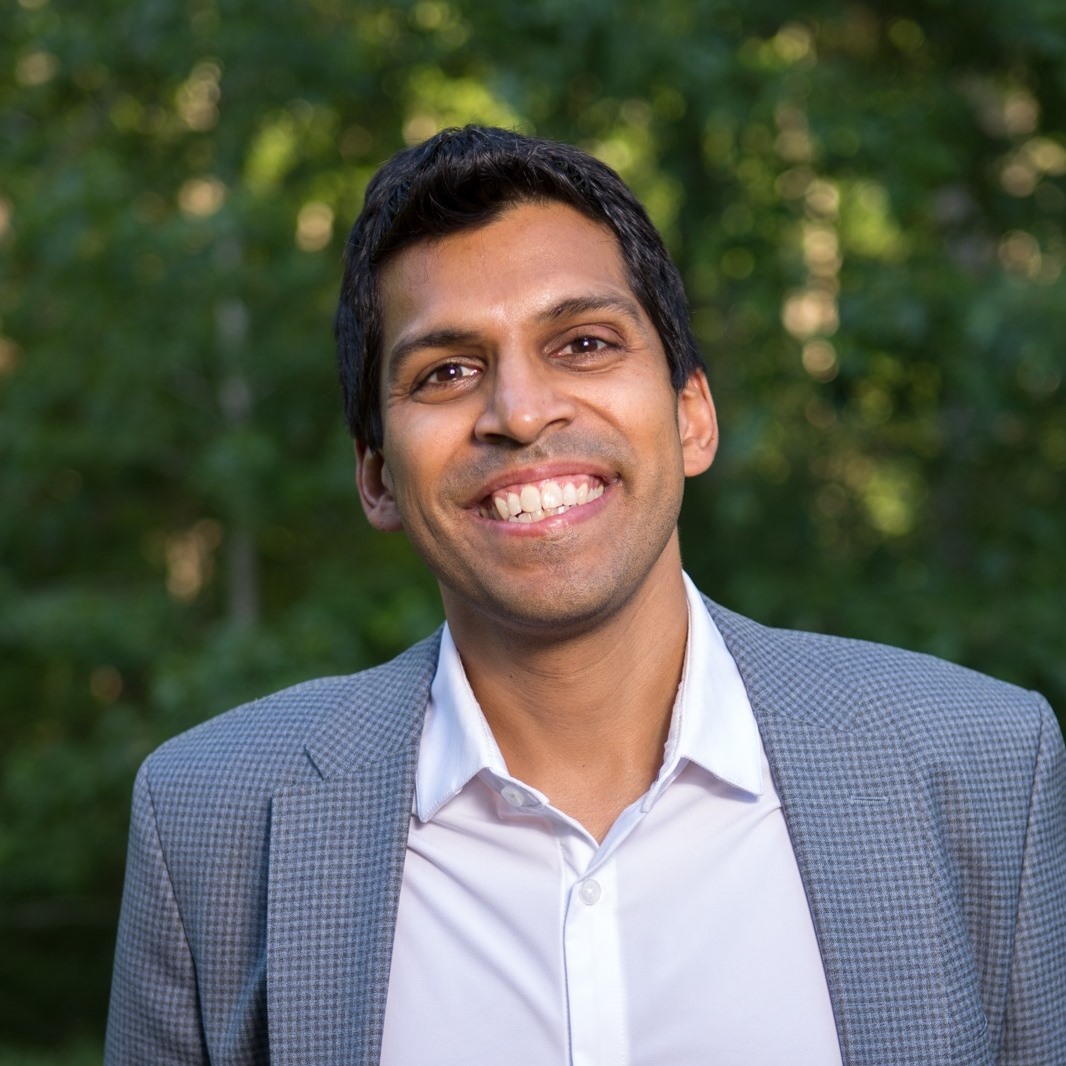 Our next candidate up in our tour of battleground states is Ronnie Chatterji, running for North Carolina State Treasurer!

As his kids say, Ronnie is a big nerd: he’s a tenured professor at Duke University and a former senior economist on the White House Council of Economic Advisors under the Obama Administration. He’s a perfect fit for a wonky job like State Treasurer, and he’s ready to put North Carolina’s money towards real good.

Ronnie says all that success is owed to his immigrant parents, who were public school educators in upstate New York. By extension, he realized, part of his success was also due to the state treasury that funded his parents’ paychecks and managed their pension fund. So he knows exactly how important the State Treasurer is to the state government and to the fabric of a community.

In many ways, Ronnie’s story shows us the power of a single person. President Obama’s bold declaration, that a skinny kid with a funny name could be elected president, left a lasting impact on Ronnie’s conception of the possible. And if elected, Ronnie would be tasked not only with investing $100 billion, but the futures of public school teachers — just like his parents — all across the state.

AM: So I’m super excited about this because I found out about your campaign through some Asian American organizations and AAAFund. But it also turns out that my aunt was your PhD classmate at Berkeley!

AM: So you’re both econ or business professors – what makes you want to run for office now?

RC: I also have a background and interest in public policy. For a while, I thought that the best way to influence policy is through providing expertise for the government, and consulting for officials — like working for the Obama administration. That was a transformative experience. I remember him talking about how, in America, a skinny kid with a funny name could be president. And I felt like, in certain aspects, I had a very similar experience to him, with an immigrant father. It made me ask myself, what could my impact be?

When I was at the White House, I was one of the people behind the scenes, behind a candidate. I found that the state and local level is where stuff happens, but that the federal money, expertise, and policies weren’t making it through to those levels of government. After leaving the White House, I wanted to make a change and get more involved. Governor Roy Cooper [of North Carolina] appointed me to a couple positions in the state government, where I started asking around about the issues my state faces. All of those experiences and my background led me to the treasurer’s office.

AM: You touched on this a little already with your time in the Obama administration, but I wanted to ask who or what inspires you, inspired you to run?

RC: I have two thoughts on this. First, on my personal side, it’s my family, my parents, who inspired me to pursue this. Both of my parents were public employees, as teachers, and so the State treasury had a tremendous influence over how they got paid. For example, their pension fund is managed by the Treasurer. The Treasurer also makes sure we [state taxpayers] are paying for the best possible care and managing the fund for the future.

So my parents’ job as public employees gave me all these opportunities, and a good upbringing. But President Obama is really my political inspiration. He framed the problems in America in a new way and inspired folks to get involved who weren’t before, and folks on the fringes to get truly invested. It’s this paradigm that we’re still working through, you know. So when he endorsed me, like, how many people running for State Treasurer get a former president’s endorsement? So his endorsement [of my candidacy] was the ultimate honor for me, and he was definitely my most influential political figure.

AM: You also mentioned this a little, drawing on the inspiration of Obama’s “skinny kid with a funny name” framing – but more specifically, how has your identity shaped your race? Like, has it influenced the narrative you tell about yourself on the trail, have you encountered any challenges?

RC: This is where anyone who’s AAPI or of a different background can relate: to the potential opportunities, and the challenges you have to overcome, with having a different story. The potential is that you can share what’s unique about you and your story. What I represent is new; I’m new. People notice that I’m different when I walk onto a Zoom, and they listen. You can talk about your background and what’s connecting you with your constituents.

I’m lucky to have been accepted all over North Carolina. But that hasn’t surprised me, by being welcomed here, because I’m from a rural area. For me, I get to use a different kind of communications strategy, with presenting a new identity – I can be, and have to be, unique and different about it. Right off the bat, I knew going into this race — and I told my staff — I can’t run the same kind of ads, the typical politician’s TV spots. I just knew that instinctively.

Instead, we ran an ad with my kids calling me the biggest nerd in all of North Carolina. So in one ad, you’re given my background, you’re introduced to what makes me unique and who I am. That’s really how my identity has been focused – on bringing out the unique. It’s been humbling to have people say, “wow, you’re the first AAPI,” but honestly, I haven’t focused on that. You know, I feel like I gotta win first, gotta keep pushing. Then we can celebrate.

AM: So let’s run with that! Say you are the first AAPI in elected statewide office. What’s a policy that you’re excited about or something that your office can do that will benefit AAPIs?

RC: As Treasurer, I’m in charge of the management of North Carolina’s money, and in order to do that, I’ll have to work with lots of different fund managers. You know, there’s $100 billion to work with, so we’ve got to have a lot of folks to help manage that money. And there are so many fantastic AAPI investment managers out there, but they haven’t had the opportunity to interview, to sit down with a fund like ours. I want to find ways to collaborate with these folks and give them a chance, a seat at the table. There’s this organization, the Association of Asian American Investment Managers, that has really helped prepared a pipeline and provide resources, and I can work with them to find folks who want to work with us. These are the types of things in government that are under the radar, but are really important in terms of representation and how people interact with issues. A lot of this stuff isn’t so partisan and is behind the scenes, so it’s possible to build a broad coalition to get things done.

AM: That’s so great, I don’t think I would ever have thought of that as a factor! Just one last thing for me: why are you supporting the Biden-Harris ticket? And what would you say to other AAPIs who are maybe on the fence about voting or something?

RC: Okay, yeah, first, to the AAPIs who aren’t voting – your voice matters more than ever before. We are the fastest growing minority – there are over 140,000 AAPI voters in North Carolina and the last governor’s race was determined by 10,000. This is our chance to have our voices heard, no matter what you believe or who you vote for. In some places, this race will be more competitive than in others, but the differences between the candidates this time around are stark. If you’re talking about the whole, “oh, everyone’s the same” argument about politicians – well this time, the evidence doesn’t back it up. It’s a clear choice.

I worked with Joe in the White House, and the first time I met him, he came up to me and said, “If I had your hair, I’d be president right now!” It was just something so not political, but it made an impression and stuck with me for years. He’s a man with his heart in the right place, and that’s the kind of leader he’ll be. No one will make everyone come together but he brings a lot of folks together.

And Kamala was a great choice. [Biden] picked someone historic but he also picked the best candidate. She’s done it all — she’s been elected at the local and state and federal levels, and now she’s the nominee for vice president. She has an understanding of all levels of government, which is so critical. Being someone who’s been in the national spotlight is a huge advantage too, because she doesn’t worry about being center stage. And the diversity of opinions she’ll bring from her identity, from representing so many groups — it’ll be invaluable. America needs to get back on the right track, both with regard to how we deal with COVID-19 and how we rebuild our country from the Trump days. Of course, I’m hoping we win the AAPI vote in my state, but also the state’s votes in general, regardless of who it is. It’s just so important for everyone to vote.