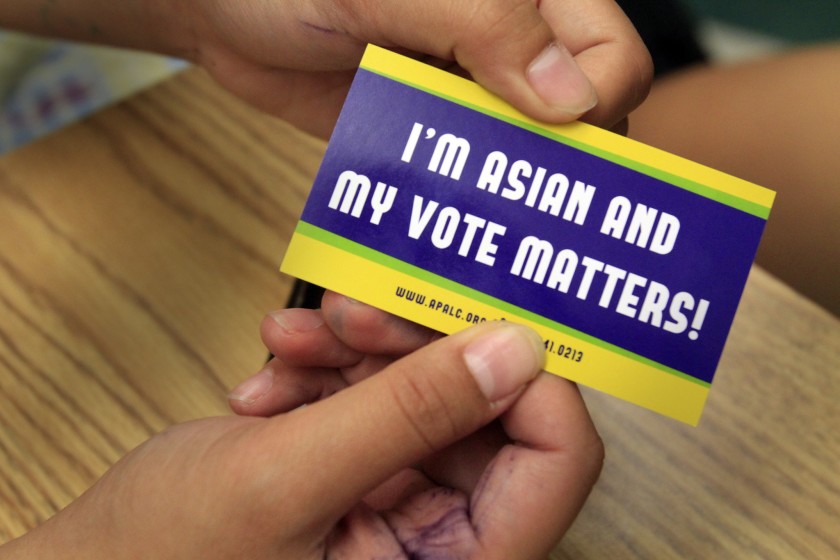 The early states wrapped up with South Carolina on Saturday, and we’re sprinting headlong into Super Tuesday. If you are a Super Tuesday voter, make a plan now to vote tomorrow! This huge bundle of states will almost certainly decide the nominee, and, with huge swaths of AAPI voters  at play, Super Tuesday presents candidates a crucial opportunity to make their pitches to our community.

All evidence indicates that candidates will do just that. We are no longer a diversity afterthought on the national stage: all the major candidates acknowledge the fact that AAPIs comprise an increasingly reliable and important voting bloc in the Democratic Party and make up key constituencies in several important states. So, as you ponder your options in Virginia, California, or Minnesota, etc., take a dive and see what the presidential campaigns are doing to reach out to the AAPI community.

Highlights of our conversations include the following:

Read on for an updated discussion of the remaining candidates! See our post from last week for more background.

1. AAPIs are leaders on campaigns

Right off the bat, the Democratic candidates’ true commitment to representation shines through, expressed in the hiring of senior staff. Diversity is no longer just rhetoric, nor are AAPIs simply relegated to diversity outreach positions. Candidates have recruited all the best, most experienced AAPI politicos in the country to serve in the highest positions on their campaigns, including campaign managers and national policy directors. We had the opportunity to speak with a few of those campaign leads in our calls, including:

Most campaigns led off their conversations by immediately underscoring the importance of the AAPI vote by including in our calls their directors of state operations, many of them AAPIs themselves. The Biden and Warren campaigns’ Nevada political directors, the Harris campaign’s California and Nevada state directors, and the Klobuchar campaign’s Iowa engagement director – all AAPI – called in to discuss their efforts to organize AAPI-specific events and distribute in-language materials.

Super Tuesday and the early states loomed large in these conversations, and many campaigns explained how they approached AAPI outreach in California and Nevada, in particular. Bloomberg’s staff touted the national listening tours the Mayor has held, and his attendance at town halls and events in Los Angeles and its suburbs. Warren’s Nevada director spoke about attending AAPI community events of every size, often as the only campaign represented, including the AAPI Chamber of Commerce. Sanders’s staff used, as an example of his dedication to the community, their turnout at an Iowa satellite caucus, made up of almost entirely first-time caucus-goers, a large percentage of which were AAPIs and refugees.

Each campaign’s outreach operation ranges in organization, but, inspiringly, all are spearheaded by eager, committed leaders who tout backgrounds in AAPI organizing. Campaign finance plays an undeniably central role in the national debate, but the disparity between organizations manifests very tangibly in campaigns’ ability to dedicate time and personnel to AAPI outreach.

Working on a shoestring budget, the Yang campaign had no formalized AAPI strategy but nonetheless drew in many previously disengaged AAPIs. Similarly, the Biden campaign, which has underperformed fundraising expectations (although this will likely change very soon), spoke about reaching out to local and increasingly national-level ethnic media, ensuring representation on campaign staff, and securing access to his events for AAPIs. His AAPI director talked about developing a resume bank to recruit more AAPIs and inviting AAPI applicants to build out their California team.

Other higher-dollar campaigns appear to be able to afford more. Roger Lau, Warren’s campaign manager, stressed the importance of disaggregating data and going beyond the monolith concept. The Warren campaign developed an AAPI-specific platform, the only campaign left in the field to do so, and points to a campaign staff of almost 100 AAPIs. The Warren AAPI director explained their community organizing program, a complementary infrastructure to traditional field operations, as a way to collaborate with AAPI organizations, engage smaller communities, and reach out to potential AAPI voters missing from traditional databases. Warren’s Nevada political director also highlighted their efforts to meet AAPIs where they are, attending community events and scheduling coffees with local leaders.

The Sanders campaign, with its enormous grassroots fundraising base, builds on those efforts. His organization has hosted almost 300 AAPI events and includes an in-house language justice team of hundreds of paid and volunteer workers that support 60 languages and translates election materials into 15 languages, including Hindi, Vietnamese, Bengali, Tagalog, and more. This team leads in-language phone banks and barnstorms, holds in-language caucus trainings, and connects with thousands of AAPI local leaders to help them access and organize under-represented communities. Their reach, driven largely by enthusiasm and Bernie’s trademark grassroots organizing energy, seems as deep as it is wide.

On the highest-dollar side, the Bloomberg campaign is growing an impressive, unprecedented organizing infrastructure fueled by the seemingly-limitless resources of the billionaire’s personal fortune. Representatives from his campaign underscored their commitment to building the most powerful organizing infrastructure on the ground. This effort has led to the translation election materials into 15 languages, staff recruited just to develop partnerships with local organizations, and multiple cross-country listening tours with a wide diversity of communities. The AAPI director and deputy director stressed the open channels of communication between the policy and organizing teams, explaining that the community input from listening tours feeds directly into his platforms. Bloomberg’s campaign is currently planning a National AAPI Council to build on that work and develop an AAPI platform. Only Bloomberg, they emphasize, has the bandwidth and money to expand the Democratic base and mobilize turnout.

4. … but philosophy still guides what you do with your resources

But everyone knows that money talks. A campaign’s strategy, on the other hand, is an expression of the candidate’s political philosophy and her philosophy is what drives the energy with which a campaign dedicates itself to AAPI outreach efforts.

The Sanders campaign, for example, underscored the twofold nature of their organizing infrastructure. His organizers meet people where they are, as evident in the commitment to language justice, but also aim to train local leaders to serve as community organizers who will grow their own communities from within and carry on the Sanders vision. While they maintain a large paid staff, much of the language justice team and their connections to the AAPI community are volunteers.

Interestingly, the Sanders campaign sent not just their field and policy teams to speak with AAAF, but their media director as well. This choice seemed to reflect their emphasis on representation throughout the campaign: she explained their strategy of creating stories about everyday Americans in diverse communities across the country so anyone could see themselves as part of the Sanders movement. They also detailed the work of one staffer dedicated solely to Sikh outreach and mobilization, including a webinar series on political organizing for Sikhs, a Punjabi dual-language barnstorm, and visiting Sikh places of worship in Iowa. His efforts have cultivated hundreds of Sikh volunteers and earned the endorsements of local Sikh elected officials, according to the campaign.

On the other hand, the Bloomberg campaign included their director of Congressional affairs, whose AAPI credentials are his time as Rep. Grace Meng’s chief of staff. He highlighted campaign co-chair Stephanie Murphy, the first Vietnamese-American woman in Congress, and endorsements from California state treasurer, Fiona Ma, and Congresspeople representing large AAPI districts, such as AAAF-endorsees Harley Rouda and Haley Stevens. Like in the Sanders call, selection of attending staffers spoke to the candidate’s campaign philosophy; Bloomberg, recognizing the limits to his personal charisma, is focused on soliciting endorsements from local leaders to represent him in communities.

However, Senators Booker and Harris showed us that they did not need the largest budget to demonstrate a thorough commitment to organizing the AAPI community. Both convened outreach committees that pioneered initiatives to strengthen political infrastructure, like creating community-specific staging events and reaching out to local AAPI organizations. Booker, along with Yang, was featured in an episode of Patriot Act, Hasan Minhaj’s Netflix show, in which he explained some of his campaign’s outreach strategies. For example, he organized Nevada’s first Tagalog-language caucus trainings.

Senator Harris rolled out the race’s first APIA agenda, on top of an AAPI outreach strategy. In her agenda, she highlighted her bonafides on AAPI issues and history of engaging the California AAPI community from past elections. Harris created “South Asians for the People” to specifically organize communities that share her heritage. Hers was among the few campaigns that talked extensively about the lack of support for Pacific Islanders and Native Hawaiians. Harris and Booker were among the first campaigns to talk about language barriers to voting and disaggregating AAPI data, and recruited the most diverse staff in the field.

AAPIs are poised to play a bigger role than ever in the election, and our impact will not be confined to traditional AAPI strongholds, like New York, California, and Hawaii. Candidates who struggled to connect with voters of color, like Pete Buttigieg and Amy Klobuchar, saw the results in South Carolina as a bellwether for voters of color in the diversity-rich Super Tuesday states. In states like Wisconsin and Michigan, high AAPI turnout could make the difference where the 2016 election was decided by a few thousand votes. AAAF endorsee Rep. Haley Stevens, as example, won her Trump +5 district in 2018 by less than 24,000 votes, about the equivalent of the district’s entire AAPI voting bloc. Look for AAPIs to make a decisive splash tomorrow.

Connecting with AAPI voters now is especially important, given the pressing issues facing the community: the 2020 census threatens to undercount AAPIs, SCOTUS allowed the Trump administration’s revisions to public charge, and a rise in xenophobia from the coronavirus outbreak, among many issues directly affecting the AAPI community. So let’s keep holding these candidates for president accountable and remind them our vote matters. We saw the most AAPI candidates run for the office ever – let’s turn that momentum into real political organizing infrastructure for our community.