Four months of crazy: a reflection on my time in DC 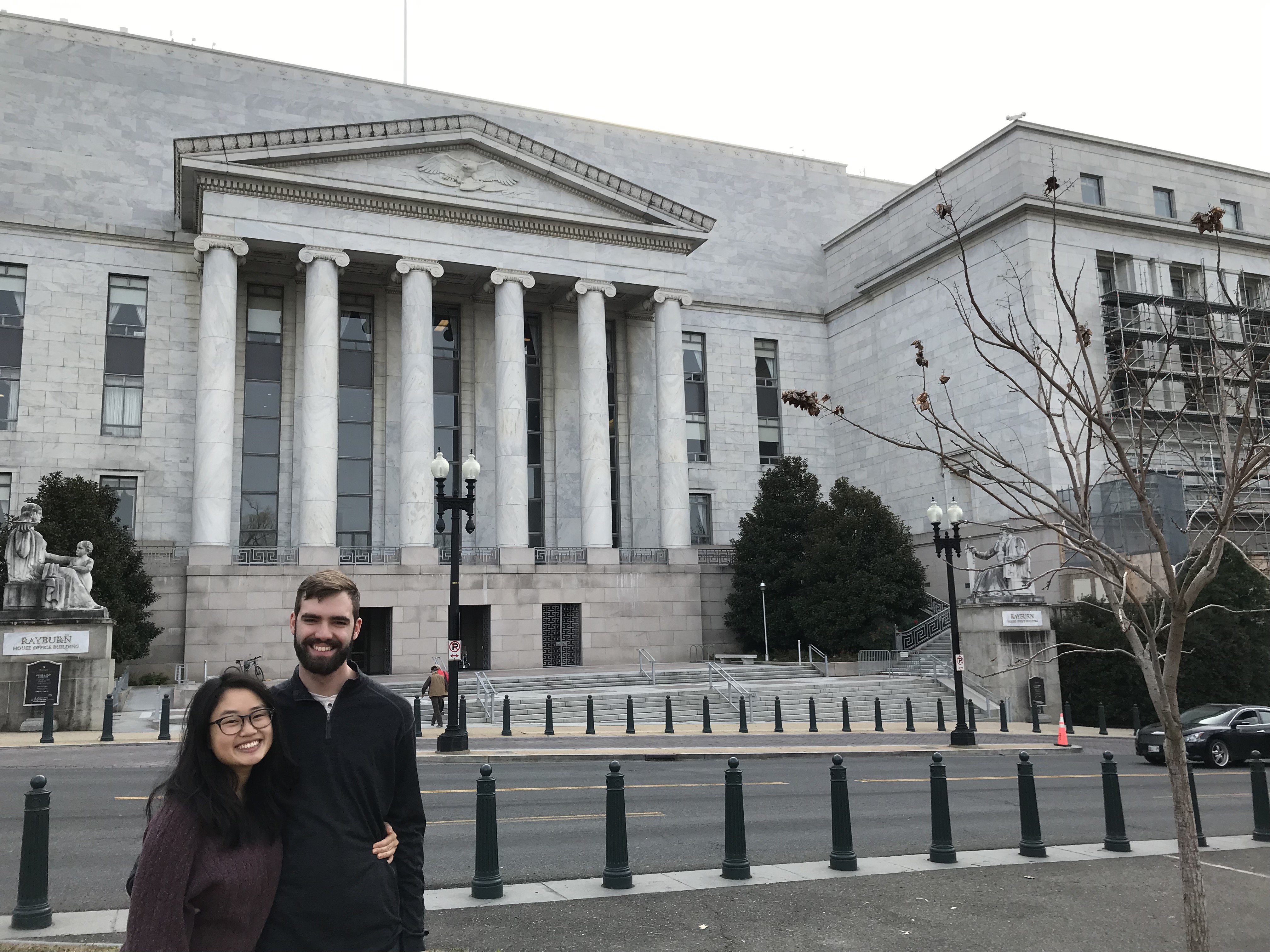 It still feels surreal that my time in DC is officially behind me. As I hunker down in my apartment, overlooking a blustery Lake Michigan capped by solid, steel-gray sky, I’m just now starting to let those experiences wash over me. While just four whirlwind months, DC has really cemented itself as a formative, albeit very compressed, period of my life: I’ve made friends, I’ve immersed myself in the nation’s history, and I’ve worked on important issues like facial recognition, public health and climate change, and space weather.

First and foremost, I loved DC. A unique combination of inspiring possibility and rich history dripped off of every picturesque colonial-style house and every white marble column across the city. Each morning filled me with excitement; I never felt overwhelmed by all the greatness or the unique moment that surrounded me on all sides. (Maintaining a long distance relationship was more of a challenge, but that’s a different story.) At the same time, I never lost the sense of awe, never failed to feel a shiver of hushed appreciation for the weighty history and hopeful idealism walking by the Capitol on my way to work. The halls of Congress felt imbued throughout with the sense that the United States of America is truly the shining beacon and undeniable seat of democracy in this world.

Dipping my toes in the swamp

The Hill, however, is a very weird place. And it’s not just because the House impeachment hearings and Congressional votes all happened while I was there. It reminds me of an elite college, where the predominant culture is that of an unspoken exclusivity, and power and influence are currency. Hungry, fresh-faced recent graduates float from job to job, just to cling to the place and constantly keep eyes out for a way up. I could never shake the feeling that work was just one big networking event. I met a girl who told me plainly that she had committed herself to playing the game on the Hill, collecting connections like trophies and fighting her way up the ladder from staff assistant to legislative correspondent and onward. She, and many others, told me the Hill is a notoriously difficult place to crack into, and that really only Hill experience begat more Hill experience. It was a strange sensation to realize that our country is run largely by 20-something year olds and a small army of criminally underpaid interns.

This aspect of my work sometimes gnawed at me. The potential for groupthink hung heavy around the insular Hill, threatening to diffuse into our country’s most important laws. But as an outsider who knew she’d stay outside, I felt that I could more objectively observe a culture wrapped up in its own importance and hyper-obsessed with political news. My college friend in DC, a fellow engineer and the furthest thing from a social wallflower, and I talked often about this: she felt out of step for working outside the bounds of politics, while I felt almost mild embarrassment for expressing my desire to return home to Chicago. Being on the Hill makes you want to stay, be a part of where everything is happening and a member of some powerful club. Everybody expects you to want to stay. Committee coworkers, other Hill staffers, NGO policy folks I met throughout my time would ask me what was next, but become unsure how to help me once they knew I was leaving DC. They’d say, Well, if you were staying, you should apply here or do this! I could refer you to someone there! This self-absorption, the idea that federal politics is everyday life, colors the lens through which the national government makes laws. I could feel what people call the Washington elite.

Feeling at home in my AAPI skin

Still, the energy and excitement is undeniable and inspiring. It makes you want to grab a strong cup of coffee and conquer the world. I feel this gravitational pull around DC itself too; once you’re there, it feels very hard to leave. DC teems with passionate folks hoping to do good. I connected with AAAF and got hooked.

A unique organization filled with some of the coolest AAPI voices in politics, AAAF is motivated to help people like me find my way into politics and normalize our community’s political involvement, in the way I never saw growing up. I learned what a PAC does and how it works; I saw the struggle to gain influence and open doors for AAPIs. The AAAF Media Team grew into some of my best friends from these last four months. We’d find an excuse – checking out a happy hour spot, holding a meeting – to eat dinner at Joy Luck House, a Chinatown institution. It was the perfect mix of Chinese auntie home-style food and brusque Chinese restaurant service. Like me, the team, Tiffany, Vivian, and Tenzin, got STEM degrees but sought to stay involved in the community politically. I had the sense of coming home, in a political way.

For once, I felt normal. An Asian American engineer interested in science, policy, and AAPI representation always felt like somewhat of an anomaly, and I got used to feeling that way. I remember attending Illinois College Democrat Conventions, where I could count the AAPIs on one hand and received blank stares when I explained I was an engineering student with only one poli-sci class under my belt. But in DC, that changed. There, I knew I was part of a distinct minority with a recognized seat at the table. I wasn’t alone anymore, and I found I was far from the only one who recognized the need for both scientifically sound policy and adequate AAPI representation. I will miss my science policy and AAPI organizer folks the most out of everything in DC…and the free museums.

The free museums are seriously hard to beat. I went to almost every single Smithsonian in DC and loved every minute, because, stereotypically, I am a gigantic nerd. Some of my favorites include the preserved giant squid in the Natural History Museum, the Native American Museum atrium, and the criminally underrated (in my humble opinion) African Art Museum. The only museum in the country dedicated solely to African art, this museum houses a crazy cool collection of Yoruba animal skin masks, incredibly intricate ivory carvings, Senegalese gold jewelry and much more. But even though the Smithsonians were a major highlight, it’s worth talking about the thriving cultural scene in DC too.

Because every state and virtually every country is represented in DC, you get the coolest, most thoughtful cultural things all over the city – events in the embassies, theater shows, conventions, restaurants, and lectures. Vibrant and wonderfully liberal, DC is as academic and intellectual a city as it is political. I once listened to a whole lecture at the Smithsonian American Art Museum entirely on the legacy of the American bison in American art, and also a show by a female Puerto Rican rapper from Minnesota with major AOC vibes. Also, the food was excellent. Even if I didn’t have many friends in the beginning, my weekends were never dull.

DC, ’til next time

This was the kind of experiential learning I didn’t fully realize I had internalized, until a new crop of interns started at the Committee and looked to me for guidance. I loved them as people but I felt a little strange and flattered that they thought I could help them navigate the strange, sometimes arcane traditions and norms of Congress. Burned into my memory were the tears of my own first days in DC, so I found it my duty to scrounge through every scrap of the last three months on the Hill for any useful insights I could share with them. Only until this last month in January did I feel grounded in some kind of understanding of the city and my own social and personal infrastructure, however temporary. I thought I was getting a cool internship, but I understand now that I didn’t just have a job; I got a whole package of experiences. Thank you DC, and all my DC friends. I’ll see you soon.