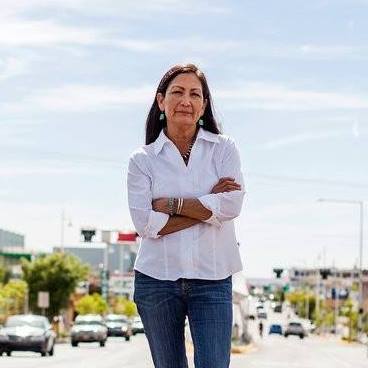 The Asian American Action Fund proudly endorses Debra Haaland for United States Congress. Deb is running for Congress in New Mexico’s 1st congressional district. As a member of the Pueblo of Laguna, Deb would make history by becoming the first Native American woman to serve in Congress!

Deb Haaland has a long history of service to progressive causes. She was the Democratic Lieutenant Governor nominee of New Mexico in 2014 and served as the New Mexico Native American Vote Director for Organizing for America NM (OFA NM) in 2012. Deb volunteered full-time for Barack Obama’s 2008 campaign and, for over a decade, has worked to engage the Native American community as voters and active constituents. In 2005, Deb led passage of SB 482 in the New Mexico Legislature, which she authored to allow members of New Mexico Indian tribes in-state tuition at higher education institutions – regardless of their residency. In 2017, Deb partnered with state LGBTQ civil rights leaders to help pass a ban on Conversion Therapy in New Mexico – one of few progressive legislation signed by the Governor.

Deb has already made history before. She is the first Native American Woman in the country to Chair a state party. Putting action to values, Deb led the divestment of the Democratic Party of New Mexico from Wells Fargo due to their significant investments in the Dakota Access Pipeline and for-profit immigration detention facilities. She is a recognized leader in tribal business and services communities. Deb was the first Chairwoman elected to the Laguna Development Corporation Board of Directors, overseeing business operations of the second largest tribal gaming enterprise in New Mexico. She successfully advocated for the Laguna Development Corporation to make policies and commitments to earth-friendly business practices, and is a former tribal administrator and has administered a local service provider for adults with developmental disabilities. In January 2016, Deb was appointed as an Honorary Commander of Kirtland Air Force Base to help create a better understanding of its missions – and the U.S. Air Force as a whole – among the community at large. Deb is a graduate of University of New Mexico (UNM) and UNM Law School; and, her daughter Somah graduated from UNM in May 2017.

To learn more about her campaign, go to Debra Haaland for Congress.