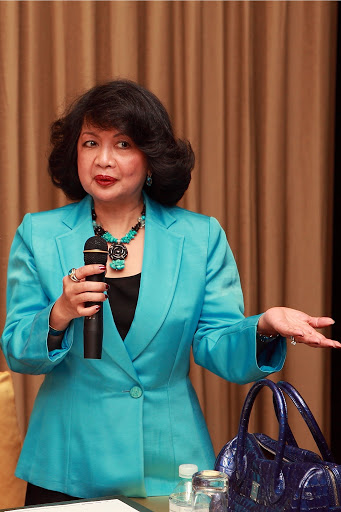 Irene Natividad, a recognized leader for women in the United States, wears many hats, including serving as AAAFund’s Endorsement Co-Chair. Ms. Natividad is President of the Global Summit of Women, an annual international gathering of women leaders from around the world, and is the Chair of Corporate Women Directors International, which promotes the increased participation of women on corporate boards globally. Most important, she runs her own public affairs firm, GlobeWomen, based in Washington, D.C.

A sought-after commentator, her views are aired nationally on PBS’ ‘To The Contrary’, an all-women news analysis series in which she has served as a regular panelist for over two decades. She has appeared on CNN news shows, Crossfire, the Today show, Good Morning America, Fox News, MSNBC, etc. Her editorials have appeared in USA Today, Los Angeles Times, Washington Post, Des Moines Register, Chicago Tribune, to name a few.

Ms. Natividad’s commitment to promoting women, nationally and internationally, stems from her decade-long involvement with the National Women’s Political Caucus, a 35-year-old bipartisan organization dedicated to electing and appointing more women to public office. Widely recognized for her outstanding leadership of the Caucus, she was elected President in 1985 and re-elected in 1987, the first Asian American ever to head a national political organization.