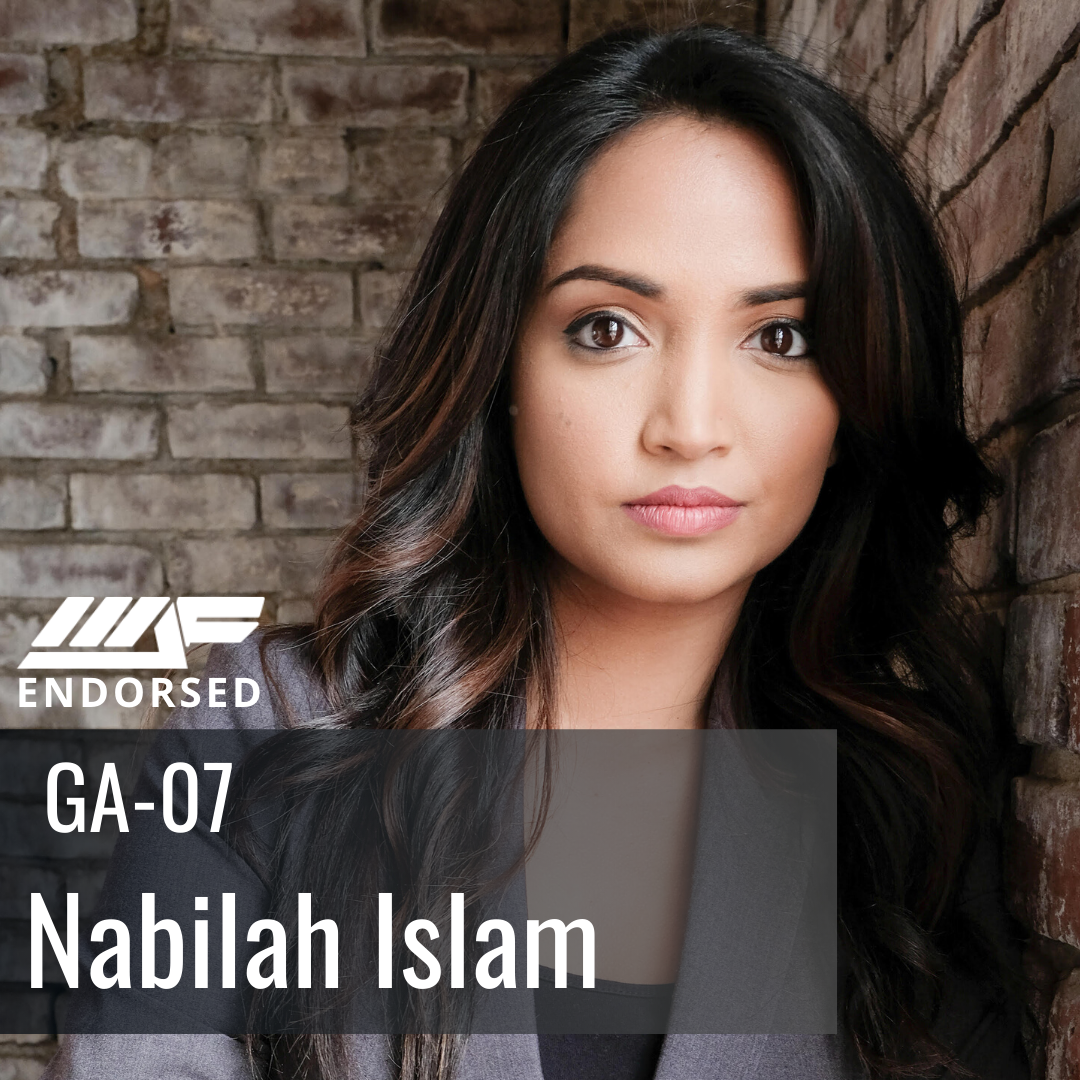 The Asian American Action Fund proudly endorses Nabilah Islam in her bid to represent Georgia’s 7th Congressional District, citing her proven track record as an organizer and advocate for progressive ideals. Islam, a 30-year-old Muslim woman raised by working-class Bangladeshi parents, is running on a platform calling for Medicare for All, student loan forgiveness, and a just immigration system. If elected, Islam will be the first Bangladeshi woman to serve in Congress and the third Muslim woman in Congress.

“AAAFund is excited to back Nabilah Islam’s historic campaign for Georgia’s Seventh Congressional District,” said Irene Natividad, AAAFund Endorsements Co-Chair. “Nabilah has poured almost a decade of her life into tirelessly advocating for the people of Georgia and for progressive ideals. She knows Georgia’s Seventh District, her own community, inside and out, and she understands how to lead. Nabilah will take to Washington that same energy and integrity and continue her fight, on behalf of all Georgians, for economic equity, accessible healthcare, and immigration reform.”

“I am the proud daughter of Bangladeshi immigrants who worked in warehouses and fry lines to build a good life for our family here in Georgia. Like so many children of immigrants, I understand firsthand that this country is at its best when families like mine can thrive and pursue their dreams, ” said GA-7 Congressional Candidate Nabilah Islam. “I’m running for Congress because our government needs to celebrate that vibrant diversity — not lock kids up in cages and ban Muslims for setting foot on our land. The Asian American Action Fund has been creating space for my family’s community to thrive for years, and I couldn’t be prouder to have their support.”

Islam filed the first-ever petition with the FEC to spend campaign funds on health insurance. If the FEC rules in her favor, Islam will remove a major financial obstacle preventing working-class candidates, women, and people of color from running for office.

2018, GA-7 had the closest margin in America, electing a Republican by just 419 votes. The district is majority-minority, with 66% non-white residents and the fastest-growing AAPI population in the country

About Nabilah Islam: Nabilah Islam is a 30-year-old Muslim Bangladeshi community activist and proud progressive running to fix our broken healthcare system, end student debt, and fight for immigrants and working people. The daughter of working-class immigrants, Nabilah grew up watching her parents live paycheck to paycheck and work long hours to get by. In high school, Nabilah’s mother herniated two discs working in a warehouse — and when the insurance company refused to cover her care, Nabilah helped her family navigate the legal process and force the insurers to pay. A proud graduate of Gwinnett County Public Schools, Nabilah’s first jobs were at the Ingles Grocery Store and the Walmart in Lawrenceville. She worked her way through Georgia State University at a luggage store in Peachtree Corners, and after graduation, began working for local progressive candidates in Georgia.

Like millions of Americans, Nabilah owes nearly $30,000 in student loans—and like nearly a quarter of her district, she has no health insurance. Nabilah’s running for Congress because she knows, firsthand, that incremental change doesn’t work. Georgia’s 7th needs bold, progressive solutions: Medicare for All, student loan forgiveness, and an economy that actually works for working people.