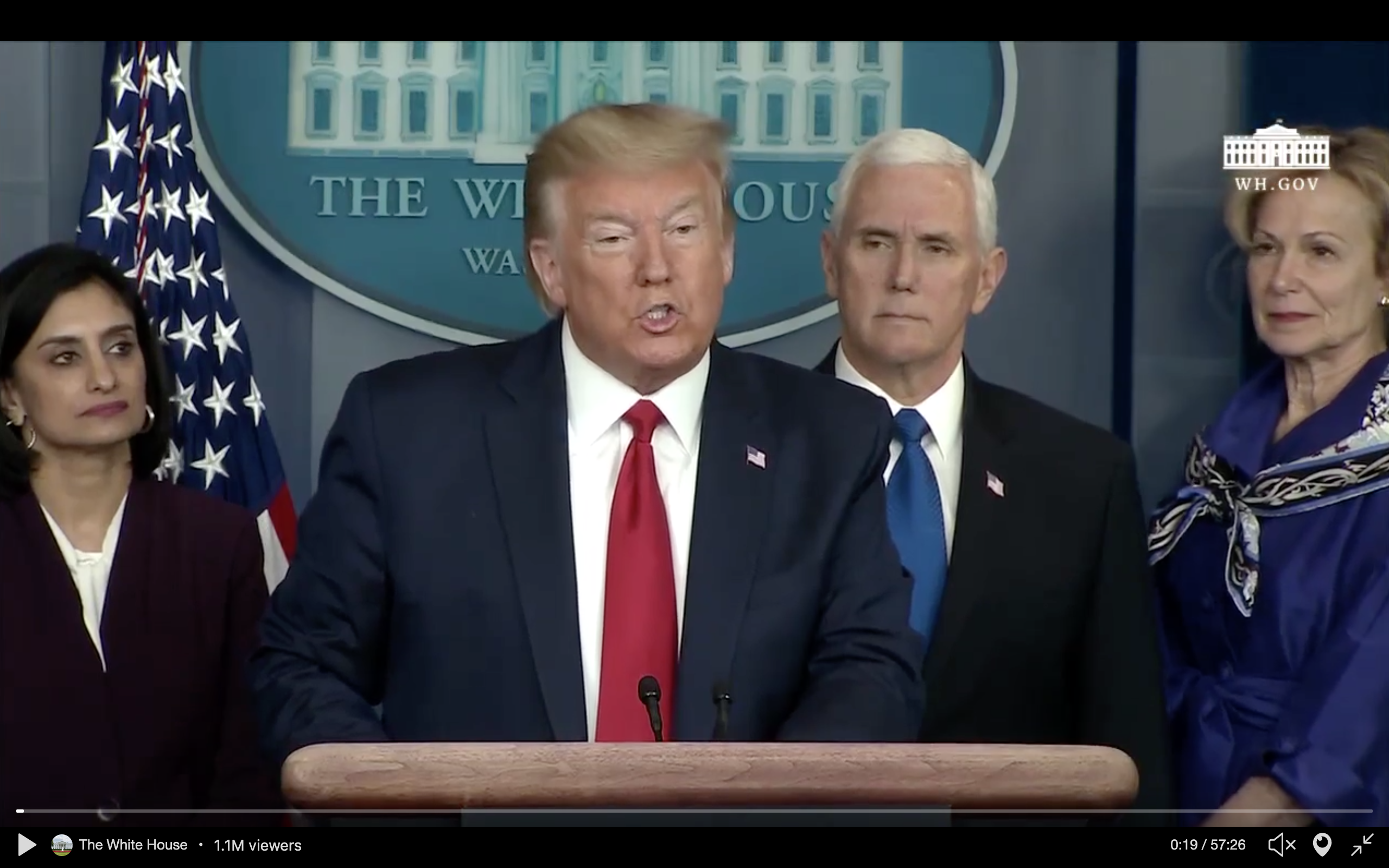 The President continues to lay bare his unabashed racism and xenophobia throughout his poor handling of the COVID-19 crisis. Once again, in three separate tweets sent Wednesday morning, Donald Trump referred to the coronavirus as the “Chinese virus.” At the following press conference, he refused multiple times to admit this term was racist and could possibly put Asian American lives at risk. The President is trying desperately to quell the economic panic and appeal to working people struggling from the economic slowdown, but his bungling attempts only reveal his thinly veiled racism and weak grasp of the big picture.

In another indication of his current priorities, the Trump administration announced at Wednesday’s press conference he would remove migrants illegally entering the United States from Mexico. Invoking a statute that allows the Surgeon General to block people or goods from crossing the border to protect against communicable diseases, the White House reportedly considered plans on Tuesday to close the southern border to all asylum seekers and undocumented immigrants. As Mexico has reported fewer than 90 cases of the virus, compared to the over 5600 reported on domestic soil, Trump is brazenly using the coronavirus as an excuse to enact the xenophobic policies he has pushed for years.

On the other hand, Trump blatantly lied about taking the disease’s spread seriously from the start, and his administration is still failing to do so. On Tuesday, a CBS correspondent revealed on Twitter that a White House official called the virus “Kung Flu” to her face. When asked on Wednesday about the Administration’s response to the official’s comment, presidential advisor Kellyanne Conway replied that she is “married to an Asian” and continued downplaying the concerns. Several Republican allies and Secretary of State Pompeo have also followed the President’s lead in inaccurately referring to COVID-19. Three weeks ago, President Trump mocked Senator Chuck Schumer, the Senate minority leader, for asking for a $2.5 billion response package; this past weekend, the administration changed its tune and requested over $45 billion in aid.

However, the racist dogwhistling is clearly meant to distract attention from, and evade responsibility for, Trump’s botched response to the deadly virus’s rapid spread. Trump outright said he does not take responsibility, after blaming former president Barack Obama for the failure to test Americans at appropriate scale. (Of course, this comes after he, in 2018, dismantled the pandemic response infrastructure Obama set up.) In response to questions from reporters, Trump doubled down that it was “nobody’s fault” except for the “original source.” Today, Trump tweeted that the “Chinese virus is not your fault!” – begging the question, who does the President blame for the disease’s spread here?

At every turn in the course of this pandemic, Trump responds with his characteristic racism and ignorance. Evident in his handling of COVID-19, he is willfully refusing to acknowledge the loaded history of attaching diseases to minority groups. While we should not be baited by Trump’s xenophobic distractions, the use of public health concerns to target and smear marginalized people is long and horrific. Challenging times call for all of us to step up and do more; this time, it means paying attention both to the administration’s failed response to COVID-19, and its exploitation of the crisis as a vehicle for their racist policies.

Don’t worry, the Democrats aren’t taking this lying down; here’s the Congressional Asian Pacific American Caucus’s response and letter asking for fellow Congressmen to refrain from using the coronavirus to stoke xenophobia.